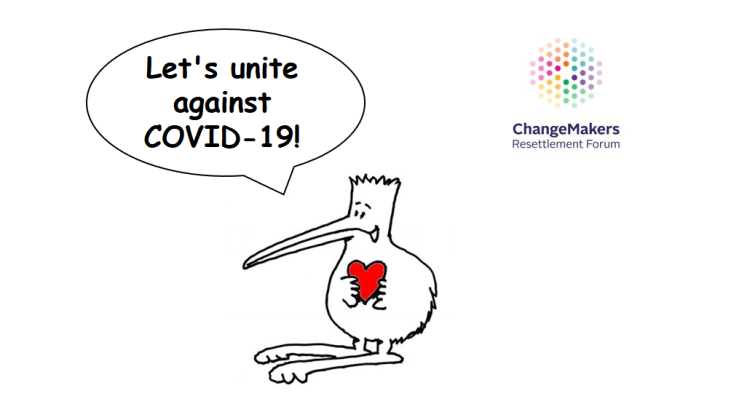 How do you get the key messages of Covid19 and the lockdown across to our diverse communities, in particular for those who struggle with English?  Ron Beernink revived his drawing skills to create simple cartoons to initially target these messages at people from refugee backgrounds.

“The Covid19 messaging was not easy to understand and to get our heads around at the start, even for people with English as their first language,” says Beernink. “I teamed up with ChangeMakers Resettlement Forum who do a fantastic and very important job in working with former refugees and their communities. I like their vision which is to support New Zealanders from refugee backgrounds to participate fully in life in Aotearoa New Zealand.”

His cartoons have been used from the start of the lockdown period on ChangeMakers’ Facebook page and have covered all the main topics from staying at home, to washing your hands, and staying 2 metres away from others when you are out.

ChangeMakers Board Chairperson, Ibrahim Omer says these kiwis have been an important part of getting messages across to former refugees in a way that is clear and interesting.

“It has been hard for many people to understand the complexity of the messaging, which has mostly been in English. So we have been trying to make sure people understand by using Facebook, the Kiwi cartoons, and translating as much information as we can. This takes time and the people with the skills and technology who can do that. We really appreciate the support of people like Ron who understand the issues that we are dealing with,” said Omer.

“Our communities are really hit hard by this virus and the economic recession that is coming,” Omer said. “It’s having a huge impact on them in so many ways. Many rely on income from jobs such as driving taxis, cleaning and working in the service industry. Many of those jobs are not viable at the moment, and won’t be for some time, so they are struggling to make ends meet. The issue around schooling at home is difficult too because a lot of our communities live in small, crowded apartments and don’t have wifi, and in some cases there is no computer in the home. For the more recently arrived communities, the whole thing is overwhelming as they have suddenly been thrown into isolation without the regular support they were getting.”

Communities have mobilised to support those most in need within their own communities says Omer, and that has made a big difference to their health and wellbeing. Many already had strong networks and these are being strengthened through the urgent needs that are unfolding.

“We are very grateful that the government has released funding for communities to access easily and quickly. We have organised packs of school materials such as notebooks, pens, and other basics that will be delivered to 60 families this week. We are expecting to do another round next week. This is thanks to money released by the Ministry of Social Development. We thank the government for being so responsive and recognising that community organisations such as ours are the ones on the ground who know where the greatest needs are.

“We look forward to continuing to empower our communities to go from strength to strength. The more we can do for ourselves, the stronger we will be. Kia kaha. Together we can do this!” said Omer.

For Ron Beernink who himself resettled in New Zealand back in 1979, it has grown to a challenge of creating a daily cartoon featuring his Kiwis that targets everyone with a clear message and helps to bring a smile to people’s faces.  “Whether it is teddy bears at the window, or a friendly smile to strangers on the street; it is these small things where we help each other through this difficult time that will make us a better, caring and inclusive society.”